What Trust Can Accomplish

Emerald, Inc. is a construction company that has happy and satisfied clients. This is a brief overview of one of those clients, Urgent Care Extra.

It started as a normal bid on a job. A couple of emergency room doctors wanted to build a second urgent care facility.

Emerald provided a competitive bid and was selected as the contractor. The build was completed and the customer was delighted in the honesty, capability, creative solutions and hitting the target completion date and price. 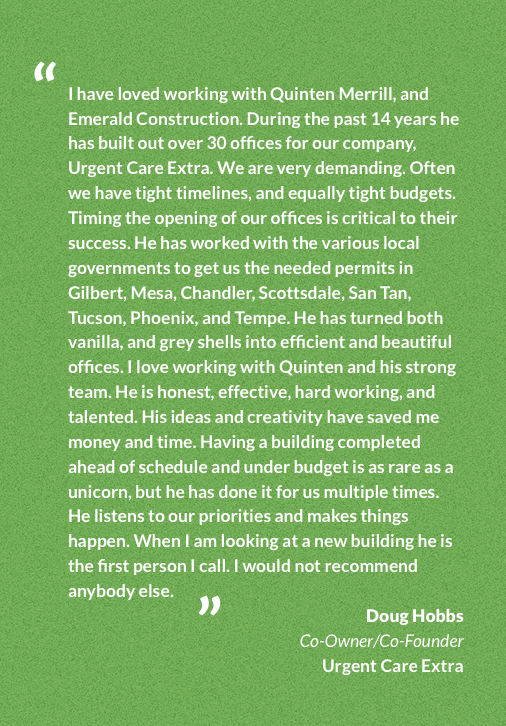 Emerald learned about the things that were most important to this client. They needed an upfront cost and time-to-completion estimate that would be correct

Two years later the client contacted Emerald and asked them how much it would cost and if they could build a new location by a particular date.

Soon after another request came and Emerald delivered another location the next year.

These last two locations and all future locations were not done on a competitive bid. They were more like a negotiation. The client explained their needs in a dollars-per-square-foot number required to ensure the lease they had would be profitable. They also shared the completion date needed to ensure a profitable opening. Emerald provided information on each of the locations that would affect the cost and completion date and based on their experience provided alternative options to accomplish the goal. The targets were set and the locations were built.

The client discovered Emerald didn’t provide a low-ball bid to get the first job. They provided a bid that was good for the client and Emerald. This same type of pricing was continued with each location. This consistency built trust. The ability to take whatever was given and complete it in the time needed and the budget provided built trust as well. 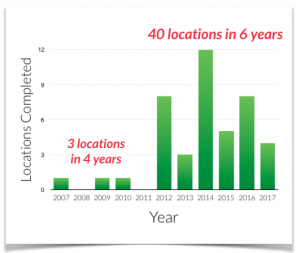 In addition, situations often arise that either could not be anticipated or weren’t anticipated in the beginning.

In most of these cases Emerald chose to take the hit for these. They could have passed it on to the client since it wasn’t their fault. However they chose to write it off as part of being a partner.

Over the next 10 years Emerald would build over 40 locations.

The trust built through the years allowed for more open communication, more efficiency and better performance.

The greater trust resulted in more of a partnership. The relationship was not antagonistic and there was an increase in offering each other the “benefit of the doubt” when it came to issues that would arise.

To the client this trust removed some unknowns other competitors had to face. They could expand knowing their costs and completion date upfront allowing them to expand faster than their competitors. They could turn over the entire process with a requested date and amount and count on it happening. They were able to focus on other parts of the expansion process.

To Emerald the trust meant their invoices were paid quickly, This allowed them to pay their subs quicker than their competitors ensuring that they received priority scheduling for new jobs. They also benefited with the increased volume of work and were able to expand themselves.

As of December 2017 Urgent Care Extra sold 45 Arizona locations, all but the first one, built by Emerald to Banner.

10 years previous the two doctors just wanted to have their own clinic. They weren’t even thinking about expanding. However, after the first few builds they saw they could, with the help of their trusted builder.

The benefits of being able to trust others are immense. The challenge is to become one others can trust and find those that can be trusted. 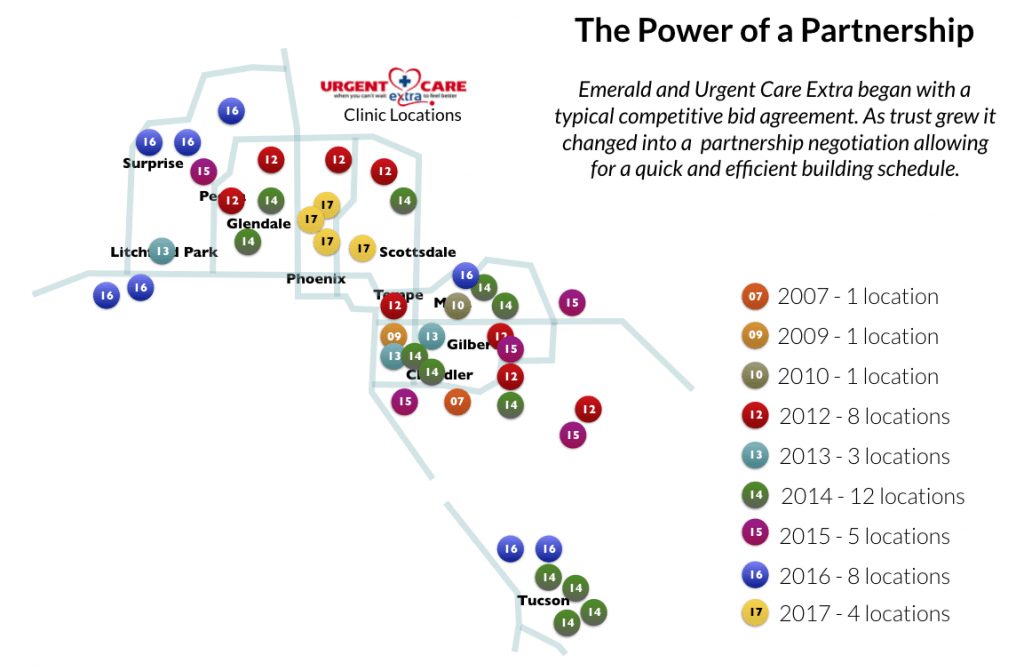